Your Memory, Health and Success Will Also Be Enhanced Without Trying!

The Peak BrainHappiness Trainer can make a major difference in your life by making you feel more joyful and satisfied.  Your attention and memory will also really improve without making any conscious effort, because it is controlled by the same brain system.   Your more intense happiness also enhances your future success and health, according to many studies. This has been confirmed by the U.S. Surgeon General, who publicized it in a TED talk.

Based on Research and Confirmed By It

University research showed that in twelve 25-minute training sessions, participants became 30% happier and remained at that level, effortlessly, for 4 months.  In just five hours of training, participants in the study became happier and less depressed by enhancing the function of the 40 cycle per second brain system, which our instruments measure with a proprietary calculation called Neureka!, designed to separate it from other EEG and muscle tension artifacts.  Since this system governs the way that the brain discovers and learns new information, it’s no surprise that the participants also became smarter and their memory improved.

This brain system actually scans the brain from its center (the midline thalamus) at 40 cycles a second, and sends the important information about inputs and memories back to the center of the thalamus, where it is put together into our experience of current events.   [It was originally called the “event binding rhythm.]  When you change the way this brain system functions, you are affecting your brain at a very basic level, and, with practice, the changes will be far-reaching and long-lasting.  They won’t go away when the drug wears off, and they aren’t limited to the skills you practice.

The brain produces brainwaves during everything it does.  Research shows when we feel good feelings such as: happiness and love, the brain produces more dopamine and Neureka! brainwaves, to motivate us to learn more. New studies show people can easily learn to increase the amount of the Neureka! waves produced by the brain. The more Neureka! brainwaves they produce, the more that they feel good feelings, like joy, satisfaction, and gratitude.  The Peak BrainHappiness Trainer Pro also shows you how Focused and Alert you are with the unique brainwave measurements it uses, and can train you to improve and control both of these.

Enhance Your Mood, Memory, Success, and Health with the Peak BrainHappiness Trainer & System

The Peak BrainHappiness Trainer Pro is a complete training system for:

It detects the brainwaves you produce and analyzes them for any combination of Neureka!, Focus, and Alertness you choose and showing them to you, and then teaching you to increase them. You can play any DVD (or video) the trainee likes, although we recommend happier ones or nature scenes.  You simply play them inside the large window on the right of the computer’s screen. As you begin to feel better, the display will get larger and the music will be louder. With this instantaneous feedback about your feelings, you will soon be able to enhance them by directly activating the part of the brain that produces these feelings–the Prefrontal Pleasure Center.

You can train both excited and calm happiness, which are quite different.  No other method trains excited happiness–the experience of fans at a live rock concert, basketball or football game, for example–which is one of the peak experiences that many people live for.

You or your loved one or client can spend less than 2 hours a week viewing or listening to DVDs, CDs, video or audio tracks that you choose.  You watch as the picture gets bigger and the volume louder when you get happier and your Neureka! output goes up.  The Peak BrainHappiness Trainer Pro acts as your coach and guides them to learn to enhance Neureka! and the associated feelings of happiness, joy, delight, pleasure, and satisfaction.  After you learn how to activate the “switch” in the brain, the effects of neurofeedback are typically very long lasting.

See this video for a more complete explanation.

Learning to monitor and create your own happiness is the fundamental basis for feeling good about our life and situation.  Here’s a great example of how quickly someone transformed their life in one session–a session that was just meant as a demo to a world famous psychologist, Dr. Stanley Krippner, the author of over 25 books:
“When Jon Cowan arrived with the Peak BrainHappiness Trainer, I was greatly distressed because of no less than three catastrophes, personal and professional, I was striving to resolve.  Jon had gone out of his way to make the appointment and so I did not want to abort it.  I am pleased that I did not!  The level of attention required was well worth it. I found myself tuning in to parts of my mind/body that had grown fallow.  The demonstration was a long one but it did not seem that so much time had passed. When it was over, I felt rejuvenated and ended the day in a good mood. The happiness that emerged from the session has never left me, and I go back to some of the self-monitoring techniques I used during the session to keep me contented, alert, and positive during each day.”
This note was written ten days after the demonstration.  When we checked back with Dr. Krippner 22 months after the demo, his positive mood was still holding.  We’ve had several other reports like this one, showing how truly powerful this training is.  Wouldn’t you like to have an experience like this?
With this new scientific approach, it is possible to increase anyone’s happiness, by training their brain with brainwave biofeedback, also called neurofeedback.
The Trainer can also be used to improve your meditation, if you are having problems with maintaining the appropriate state.  Our MeditAider designs can be set up to give you feedback on your intensity of Focus, Alertness, and Neureka!, and to issue an alarm when you go outside the established range.

What's Included in the Trainer

The Peak BrainHappiness Trainer Pro is the deluxe version of the Peak Achievement Trainer, the product we introduced in 1998 for improving Focus and Alertness.  Don’t let its simple but elegant design fool you into thinking its not a professional grade product.  It includes: 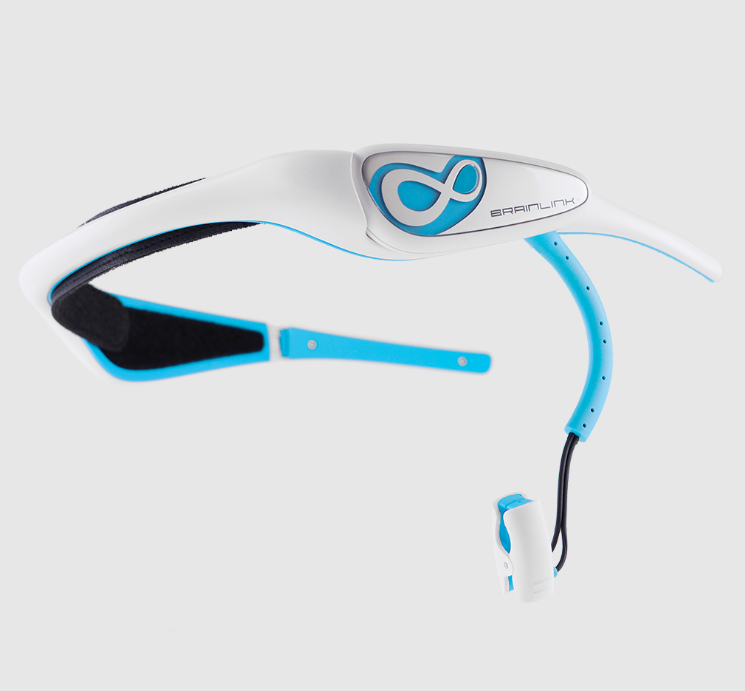 We are very pleased to introduce our new Peak BrainHappiness Trainer Pro, which combines great mental training with access to the iOS and Android programs produced by Macrotellect, NeuroSky, and MyndPlay.    You can download the MyndPlayer for both Android and iOS.   You can then go shopping on their website, browsing a long list of mind adventures, which use the information about your brain state in very unique and fascinating ways.

The new package includes two different sets of software, and sells for a lower price than our original Peak BrainHappiness Trainer!  Our BioExplorer software is far superior for mental training purposes because the brainwaves are sampled 512 times a second, while the MyndPlay, NeuroSky and BrainLink Pro software delivers an average value for the “Attention” and “Meditation” measurements only once a second, which is too slow for good training but works for their content.   Our protocols for Focus and Alertness are much more responsive and easier to understand than these measurements in the other systems, and none of them come close to the Neureka! protocol.  They are the only ones supported by the research we have written about previously and featured on our website.

Add the Mood Elevator to Stop the Blues

The Mood Elevator is an additional software suite and Manual, which can be packaged with your purchase or bought later.  It is based on some remarkable research on severe, treatment-resistant depression described on that webpage.  Low moods due to depression are very different from lack of happiness, but the Mood Elevator can lift them in just two hours of training.  The Mood Elevator requires the Peak BrainHappiness Trainer or the Peak Achievement Trainer’s hardware and software in order to function.  It includes feedback screens that combine the Mood Elevator and Neureka! so you can compare and boost both. No other training system can do both!