This new approach works far more quickly and effectively–requiring far fewer sessions to produce major improvements in autistic issues–than any of the others described in many journal articles since Dr. Cowan presented the first case of autism successfully treated with neurofeedback in 1994.  It is the only training system combining Neureka! and Focus.

The Socialize ACE™ trains the ability to Focus and sustain attention, and the ability to understand experiences (Neureka!) by putting together various types of perceptions, memories, and other information into a unified event. The individual with autistic issues, including Social Brain Dysfunction (SBD), lacks well developed and integrated systems to do this, the SBD sufferer has great difficulty making sense of their experience, and has problems learning appropriate behaviors.

Normalization of Social Responsiveness Scale-2 in 18 sessions
Our university-based collaborator, Dr. Sokhadze, gathered together the results from 18 sessions of training for all the clients he tested with the Social Responsiveness Scale-2 (SRS-2) in the published study and his more recent ongoing research.  The SRS-2 is considered to be one of the best and most complete scales. His findings included:

Normalization after training indicated by highly significant (p = .006) improvements in the total T score, a decrease from 83.5 to 71.0 in their parents’ ratings, bringing the group average 51.0% closer to the normal score boundary of 59.  “p” is the probability this occurred by chance–called the significance level.  The smaller the better. 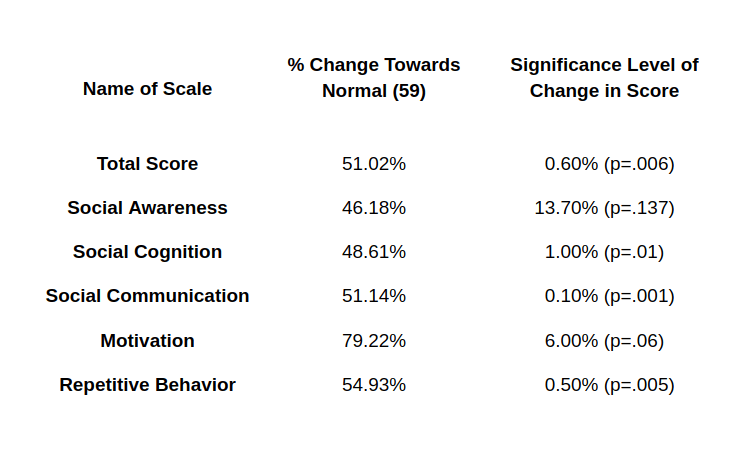 Normalization of ASEBA in 18 sessions
He found even larger improvements in attention deficit, and problems in depression, anxiety, attention and oppositional-defiant behavior for subjects tested with the the Achenbach System of Empirically Based Assessment (ASEBA), a comprehensive approach to assessing adaptive and maladaptive functioning with parent’s ratings. These improvements actually brought them into the normal range.  That’s why most of the percentages are actually more than 100%. 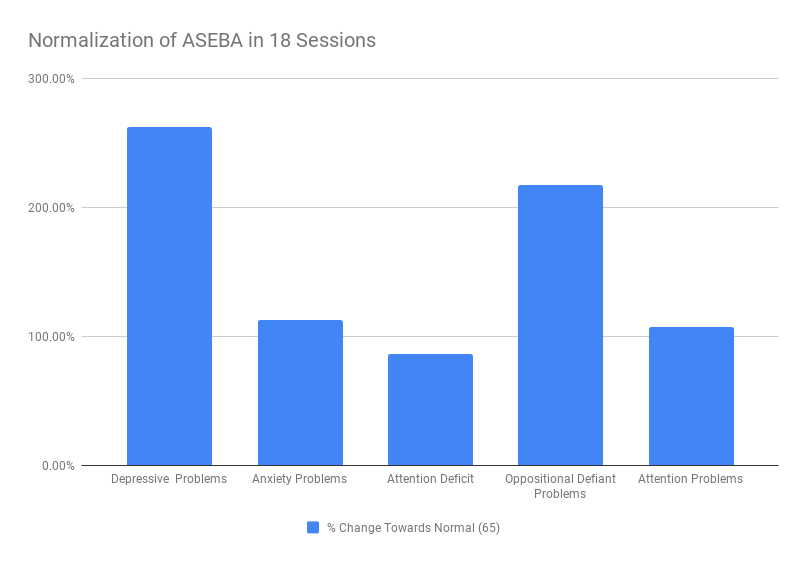 Most values improved over the normal boundary.

In the previous, published study, there were significant improvements in both Lethargy/Social Withdrawal and Hyperactivity measured for the participants in the study on the Aberrant Behavior Checklist in 18 sessions.
Dr. Sokhadze has also presented and published studies combining this neurofeedback technique with Transcranial Magnetic Stimulation (TMS), and found even stronger improvements.  Dr. Sokhadze presented this when he was given the Distinguished Scientist Award from the Association for Applied Psychophysiology and Biofeedback.  Unfortunately, TMS requires very expensive equipment and cannot be performed at home.
Very clearly, none of this occurred by chance, even with a small number of subjects.

Major Changes in Younger Children With Both ADHD and Autistic Issues

Dr. Estate (Tato) Sokhadze has just demonstrated that a combination of the same two proprietary neurofeedback methods–Neureka! and Focus–in the Happi Focus Trainer made a major difference in the conduct and attention of a group of 10 children, averaging just over 10 years old, with both of these problems, even though they were usually treated only once a week.

The behavior changes were all rated by parents using three different scales, which overlapped to give a more complete picture of the clinically and statistically significant changes:

This is a remarkable combination of improvements to observe in this very difficult population.  There are brainwave changes which indicate that both Focus and Neureka! training were responsible for these changes.

In the earlier published study, the 18 children and adolescents with high functioning autism were trained for 18 sessions to improve their Focus measure and raise the Neureka! measure above a minimum, while keeping it below a maximum, which was hard to reach. There were quite significant improvements in both the Focus and Neureka! EEG measures, comparing the first and last session.  Increasing Neureka! made the experience enjoyable for the children, who were happy to participate.  There were no drop-outs.

As the graph shows, there was a very significant (p = .031) improvement in Neureka! (the graph titled “40 Hz. centered gamma”) across the sessions despite the fact that they weren’t instructed to go all out to improve Neureka!, but just to keep it above a minimum.  That kept the movie going, and the better they did, the larger the picture they saw. This Neureka! measure showed clearer improvement over the 18 sessions than a traditionally filtered 40 Hz. band. This is consistent with it being easier to learn because it is not confounded with other gamma rhythms.
The Focused Attention measure was the most significantly (p = .001) improved by training.  While the article did not provide a graph for the Focused Attention measure, it did provide a graph for a more traditional measure of improvement in Attention in ADHD, the theta to low beta ratio, which was significantly (p = .046) improved during the study.  The graph shows that it was still decreasing at the end of the study. It was very highly correlated to the Focus measure. There were also very similar significant changes in the theta to high beta measure, and the overall theta to beta ratio, not shown here.
It’s clear that all four measures were continuing to improve at the end of the 18 sessions, pointing to the idea that they could get even better with more sessions.
Our proprietary customized measures were better than the more traditional ones, making our approach more effective and valuable than any competitor.
Furthermore, the researchers found evidence that both of these changes (Focus and Neureka!) were related to the significant improvements in Lethargy/Social Withdrawal measured by the Aberrant Behavior Checklist.
So as the brainwaves continue to improve with further training, the behavior should follow. 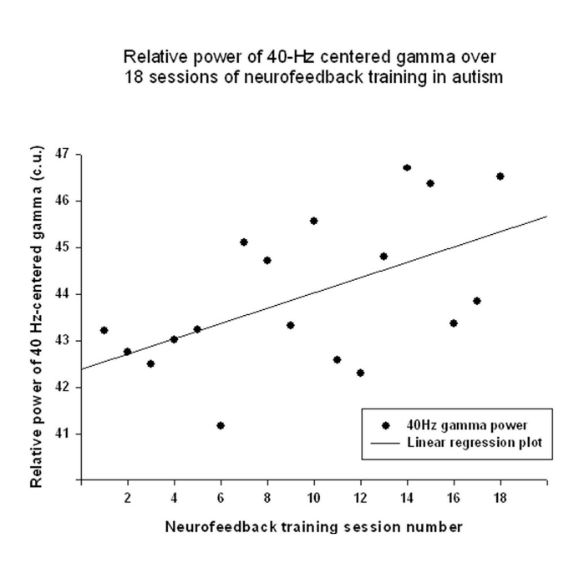 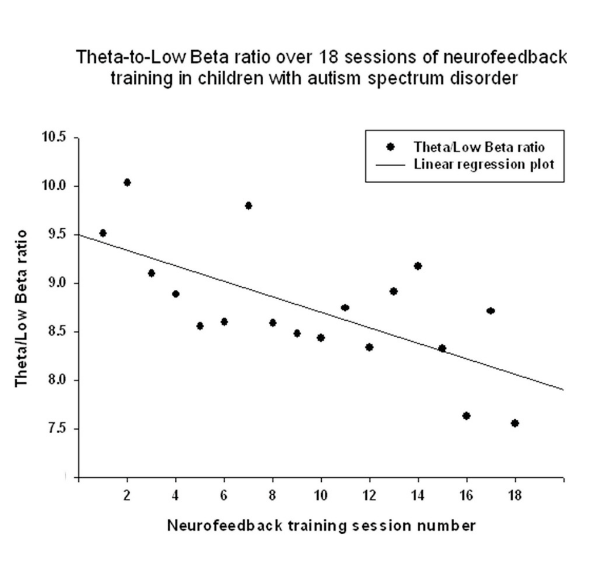 For more information about our studies and theory about autistic issues, zoom around the large poster we presented at our Innovative Technology Demonstration at the International Society for Research on Autism.
Other Benefits of Neureka! And Focus Training
Another published study on more normal teenagers showed that the same combined training significantly:

♦ Increased happiness during the training session, leading to better compliance with training.

Although these have not yet been quantified in clients with Social Brain Dysfunction, the attention and memory improvements are consistent with the decreases in theta to beta ratios observed.
Comparison with Mente Autism Neurofeedback

For More Information, a Special Report on “What is Neureka!?”, and our Newsletter, please subscribe now!

Call us for special pricing!

This website is primarily focused on the Happi Focus Trainer, but it also contains background information on the Peak BrainHappiness Trainer, its predecessor for professionals with 77 designs and the Alertness protocol, which is still available, and other current Peak Achievement products.  As you browse the site, you can find the emphasis of the page by the logo in the upper left corner.
The newer Happi Focus Trainer is a more complete training system with the same key elements as the Socialize Ace.  It may produce even better changes than the Socialize Ace.
Disclaimer: The Socialize ACE™ is an educational instrument. It is not intended to treat or diagnose any disease or condition, and is not licensed for evaluating advertising or other media. Autistic spectrum disorders are very complex and variable, so it would not be truthful to state that it will reliably improve any one particular symptom or behavior.
Socialize ACE™ – All rights Reserved | Designed & Developed By: Webliteseo.